This fortnight at Shopping Our Stash we're celebrating Christmas plants and greenery such as fir trees, poinsettias, evergreen boughs, mistletoe and of course, holly and ivy! I've got a little bit of all of the above lol! 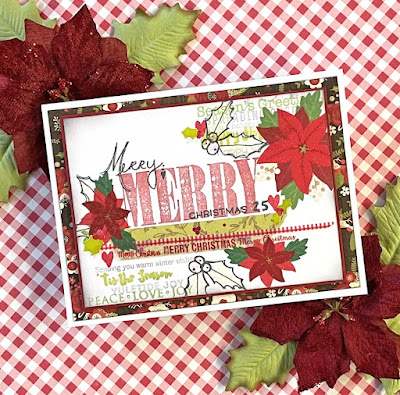 Those Sticko Poinsettias have to be five or six years old, though having found a small cache of them and been re-smitten, I will likely use them up pretty sharpish. There are two Simple Stories washi tapes with botanical themes that came in a fab birthday box from my friend Gina this summer; some tiny (ancient!) enamel holly stickers of unknown origin; stamped holly leaves from Wendy Vecchi's Doodle Holiday stamp set; and pretty much EVERY smaller holiday sentiment stamp I own making up the background, including some Hero Arts that have to be ten years old, some Pretty Pink Posh that are four or five years old and a couple from Wendy Vecchi's Doodle Christmas which is not very old, but is a huge current fave with me. I was slightly shocked to learn that the Tim Holtz/Stampers Anonymous alphabet stamps making up the large "MERRY" debuted in 2004?? I don't think I've had my set as long as that but... the older I get the faster the years seem to roll past so I guess it's possible. Just a warning that I really enjoyed this "stamped collage" technique, so you will definitely be seeing more cards in this style!

Meanwhile, do pop over to SOS to see amazing cards from the design team in LOTS of styles... one of them, at least, is bound to inspire YOU!