Would this be a good time to show of the next five pages (and six letters!) of the Eyelet Outlet Alphabetical Brad Book? Oh and I've made a cover for it too, but more about that in a minute. Meanwhile, here's Part Two: 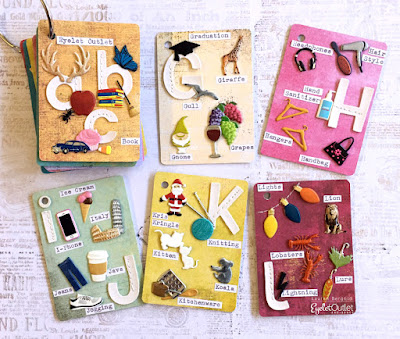 As with the first set, these pages are ATC-sized (2.5 x 3.5") and built on top of an older, incomplete deck of playing cards to which I've added not-quite-solid patterned papers in a variety of colors. The brads representing the letter G are: Graduation Hat, a Giraffe from the Jungle Mix, a flying Gull from our Seagull Brads, all three varieties of Grape and a glass of red from our Wine Brads, and a Gnome, who is on sale! 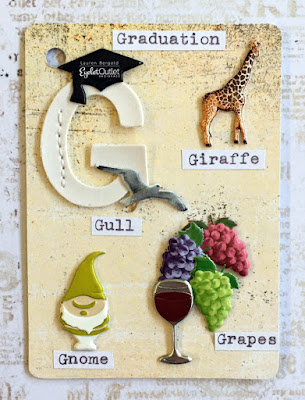 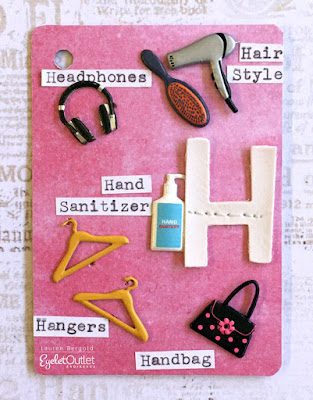 From the start, I knew I'd have to double up a few letters, because there just are not nearly as many I and J styles as there are in more frequently used letters like H, M and S. Throughout the project, I've taken a few liberties with names to get a better mix; so I've made sure to use the exact titles and place direct links to make each brad style easy to find in the EO Store!
The letter I features: Ice Cream, Italy in the form of Colosseum and Pisa Brads (which are on sale!) and an i-Phone from the Selfie set. Representing J we've got: a Java aka Coffee Brad, Jeans from the Jeans and Tee Shirt set and a Sneaker Brad I've re-named as Jogging. 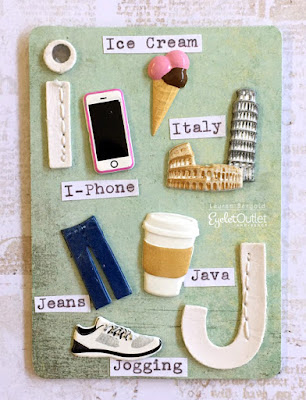 On to the letter K: Kris Kringle is part of the Santa and Mrs. Claus power couple, Knitting Brads are one of my all-time faves (and they're on sale!), our Kitten Brads packs have three shapes and are divided into half white and half black, but I tend to save the latter for Halloween; Mr. Koala comes from the Sloth and Koala set and Kitchenware is a bit of a cheat, since I combined items from the Cooking Brads and Baking Brads sets. 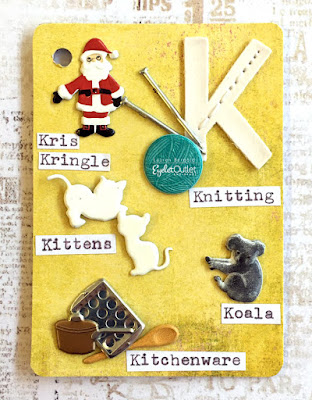 Representing the letter L: Lights technically called Holiday Lights, a Lion from the second Jungle Mix, called Lion Tiger and Zebra Brads, Lobsters from the Crab and Lobster set, a Lure from the Fishing Lure Brads, and Lightning from our Wizard Hat and Lightning Bolt Brads. 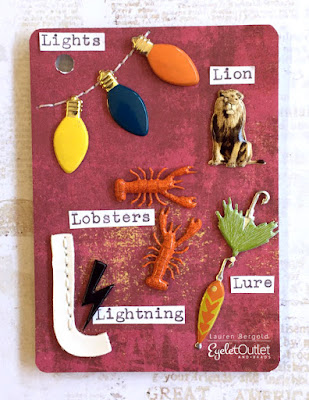 One of my favorite things about any minibook project is making the cover. I used a similar set of leatherette alphabet stickers, but in lower case, which are a bit smaller (also I was out of uppercase B's!) Since I wanted the typed title to stand out, I didn't label each brad, but I did manage to work in nine styles, which are: Antler Brads (I adore these and they're on sale), an Apple and an Ant; Book Brads, a Butterfly Profile (which is sadly out of print, but we still have regular Butterfly Brads) and a Broom from the Vacuum and Broom set; A Classic Car, a Cupcake (which is on sale) and a Candy Corn Brad. 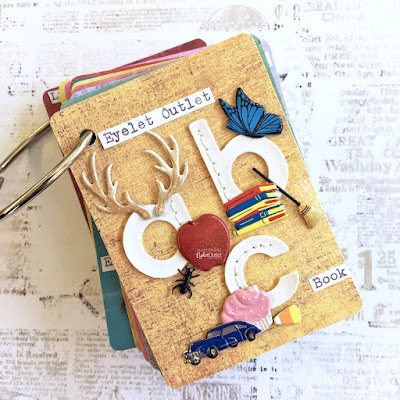 We're only halfway through the alphabet, so I'll be back in the next few weeks with the letters M through Z; meanwhile, whatever letter you need a brad for, I can assure you we have one at Eyelet Outlet!

PS: If you'd like to see the letters A through F, you can find them in this post!