...Feed a Bunny!" is yet another sentiment that I saw on a t-shirt, and immediately had an entire card idea, featuring my Eyelet Outlet Rabbits and some other garden-related brads. Since it was just before Valentine's Day, and I had heart-y cards that made more sense, I sketched it on a piece of scrap paper and set it aside. I'll show you that sketch in a minute, but first, let's see the card: 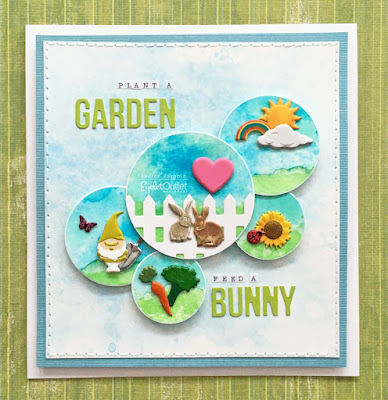 Generally, when I sketch an idea, it's just visual notes of things I want to remember; often the card I wind up making doesn't look much like the original sketch, but this time it really did! 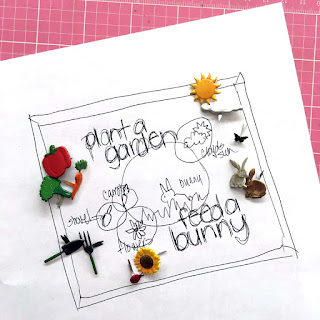 My diecut circles are cut from a piece of watercolor paper on which I had painted green grass and blue sky and then... for some reason... abandoned. I adhered a piece of picket fence diecut to the largest (2") circle and added the Rabbit Brads and a Heart. The upper of my two 1.5" circles holds a Sun and Cloud Brad as well as a rainbow from the Unicorn and Rainbow set; the lower has a Gnome Brad (they're on sale!); a trowel from the Garden Tools set and a Mini Butterfly, which I hadn't realized was discontinued, but you could swap a full-sized Butterfly, or a Mini Bee. The two 1" circles feature a Sunflower and Mini Ladybug; and the carrot and broccoli from the Vegetable Brad Set (which is also on sale) respectively. 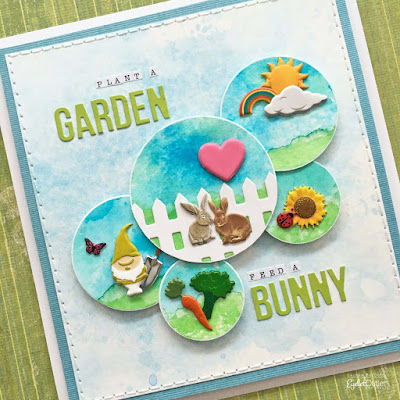 With a change of sentiment, this design could easily translate into an Easter card, a fun birthday greeting for a gardener, or maybe even an anniversary card? That's the great thing about creativity, when you plant an idea, you never know what you might harvest later!