if you've played along with us in other years at ♥JINGLE BELLES♥ you'll know that we have a few "fixture" challenges which are the same theme, at the same time, every year. for instance, the first challenge of october is always pink xmas. and the fortnight which includes earth day is always "re-use, re-cycle, up-cycle". that's just the way it is, lol. so it's time to grab that pretty piece of packaging you saved; or the clear plastic bakery box that could be diecut into shaker card awesomeness; or maybe there's a cereal box in the recycling bin that you could decoupage or paint it to make *free* chipboard embellishments. i personally can never resist saving the beautiful holiday cards we receive each december. sometimes i get really creative and fussy cut different bits and pieces... but this time i pretty much just stuck them together, lol. here are the storebought cards i started with: 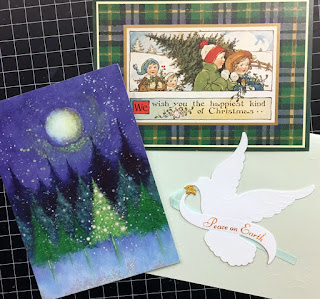 and here's what i made:

see? i told you, the cards did almost all the work for me!!! and in fact, i only wound up using two of the three cards. because when i trimmed down the sparkly tree scene to fit the plaid frame, it turned out that the cool dove covered up waaaaaaaay too much of the design. i tried adding diecuts... a larger sentiment... and... well, let's just say i tried adding a LOT of different options, and none of them really worked. eventually, i stumbled across this ancient sentiment sticker, which featured exactly the same shade of purple as the sky behind the trees. so i just added a few skinny wisteria cardstock mats, some fun eyelet outlet snowflake brads and called it a day!

stephanie has a fab card to show you, and i'll bet you won't guess what her recycled element is until she tells you! hop on over to ♥JINGLE BELLES♥ and check it out, darlings!
Posted by lauren bergold at 12:00 AM