47 patterned papers on ONE card??!

ok, yeah, i realize that sounds like AT LEAST forty too many... even for me! :) but there's a method to my madness, i promise. so bear with me for one second whilst i explain that this week's challenge at shopping our stash is called, "thankful" and we'd like to see either thank you cards OR a thanksgiving themed project. now that's out of the way, here's my card:


see? admit it: it's not nearly as nuts as you thought it was going to be, right? i'd love to claim that *I* dreamt up the whole idea, but actually i saw this amazing piece of paper sculpture on pinterest and found out it was by a french artist called maud vantours*. my first thought was, "what an amazingly simply but dramatic thing to do with paper!" but-- obviously** --my second thought was, "that'd make a great card!"! the original uses all solid papers, arranged in a similar clustered rainbow design. but the name of the blog is "shopping our stash"; the point is to creatively employ stuff we've already got; and this might be the best way ever to use up a LOT of really small patterned paper scraps. which, believe me, i've got! 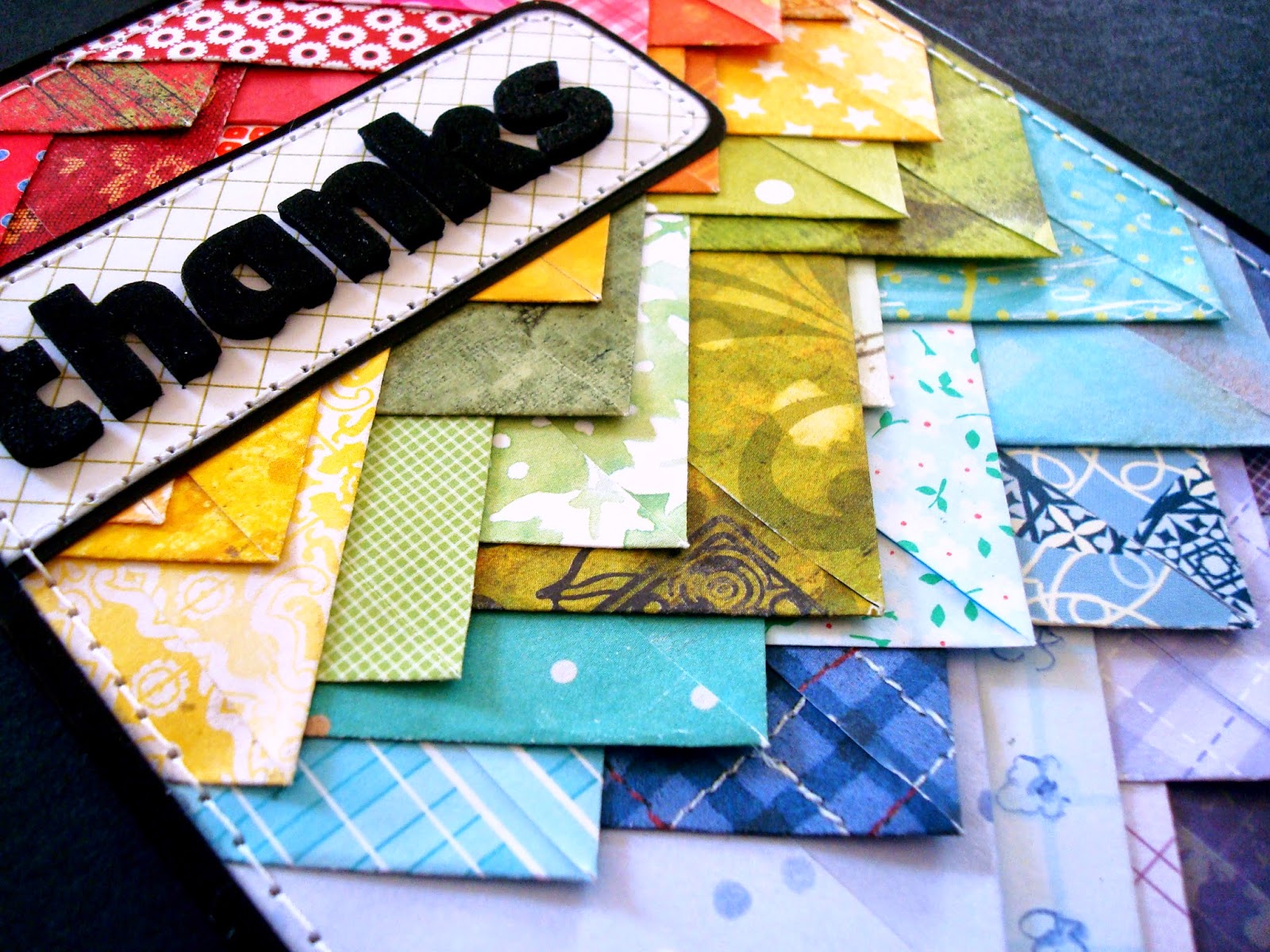 admittedly, it's not what you'd call a fast process, to fold each scrap into a neatly pointed triangle and attach them all in cascading layers. also, your finished card will be HEAVY... this one measures 5x7 and weighs nearly two ounces without even an envelope. but this is exactly the kind of repetitive task that i find relaxing rather than tedious; plus, as you can see, even a maximalist like myself wasn't tempted to add anything but the most spare of sentiments to the finished panel! for a less intensive construction process, i suppose one could just cut and layer flat trianges (or circles or hexagons!) but i have to tell you that the texture of this thing is actually even cooler in real life, and i'd be reluctant to give that up for the 21-cents an extra ounce of first class postage will cost.

if you're interested in seeing a step-by-step demonstration of how i put this thing together, plus a second (similar) card version, scroll down to the post below for a little mini-tutorial. meanwhile, there are plenty more SOS design team members, whose ideas and energy make me feel extremely THANKFUL each and every week, so why pop over not see what they've made for your inspiration? ♥

*to see more of maud vantours' bold masterpieces of creatively cut, folded and stacked paper shapes, click the geometrie section of her blog and be sure to scroll all the way down!