i've mentioned before that what i love most about ICAD is that it embraces process, rather than outcome. when you sit down with your index card each night there is ZERO pressure to come away with a gorgeous or usable finished product. for me that translates into working a lot more loosely, not having a plan, using my underemployed pencils and paints, trying out stuff i've never done before, experimenting with ideas that might not work. it's a sort of art lab. the point is to be... well... pointless! i know it may seem like a "waste" of time and supplies, but believe me when i say to you, the whole "pointlessness" part is the key. because i promise... you work differently when you don't care about results. you take more risks, you do WEIRD stuff, and sometimes, just once in a while, something awesome happens and you think, "AHA!" i was lucky enough for that to happen on saturday, and it made my whole week! 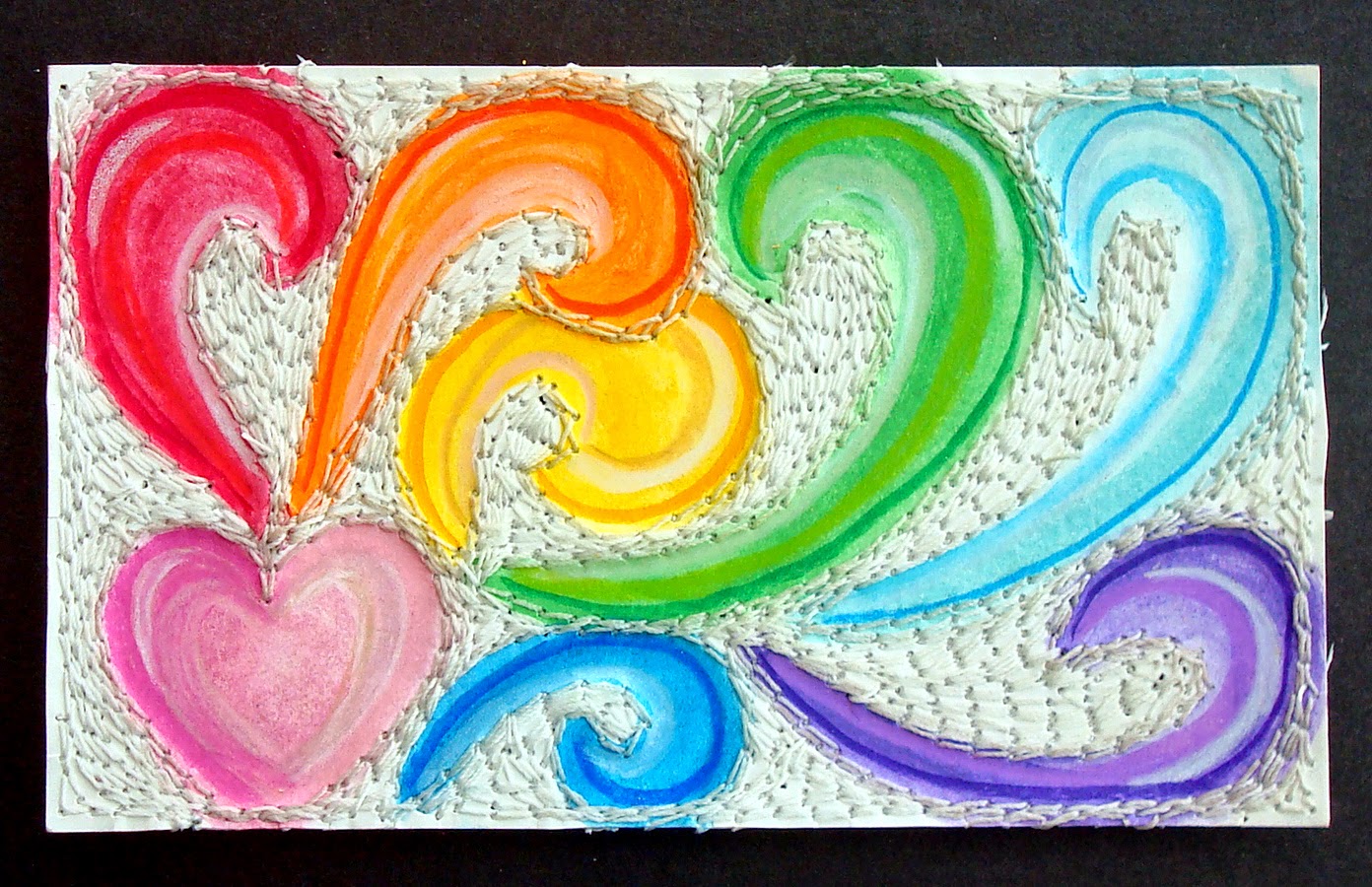 014: watercolors and pencils and stitching
i wish i had taken photos of this as it evolved because it totally illustrates the "trying out things that probably won't work just for fun" premise really REALLY well. i painted a heart and swirls with watercolors. they looked ok, but not that interesting. i stitched around each swirl, and the white thread hardly showed up. i thought about switching to black, but decided that maybe a second layer of white would work. it didn't, really. the whole thing was frankly pretty "meh" and i was ok with that. how and when i decided to fill in the whole rest of the card with white stitching i have no idea, but the next thing i knew, that's what i was doing. 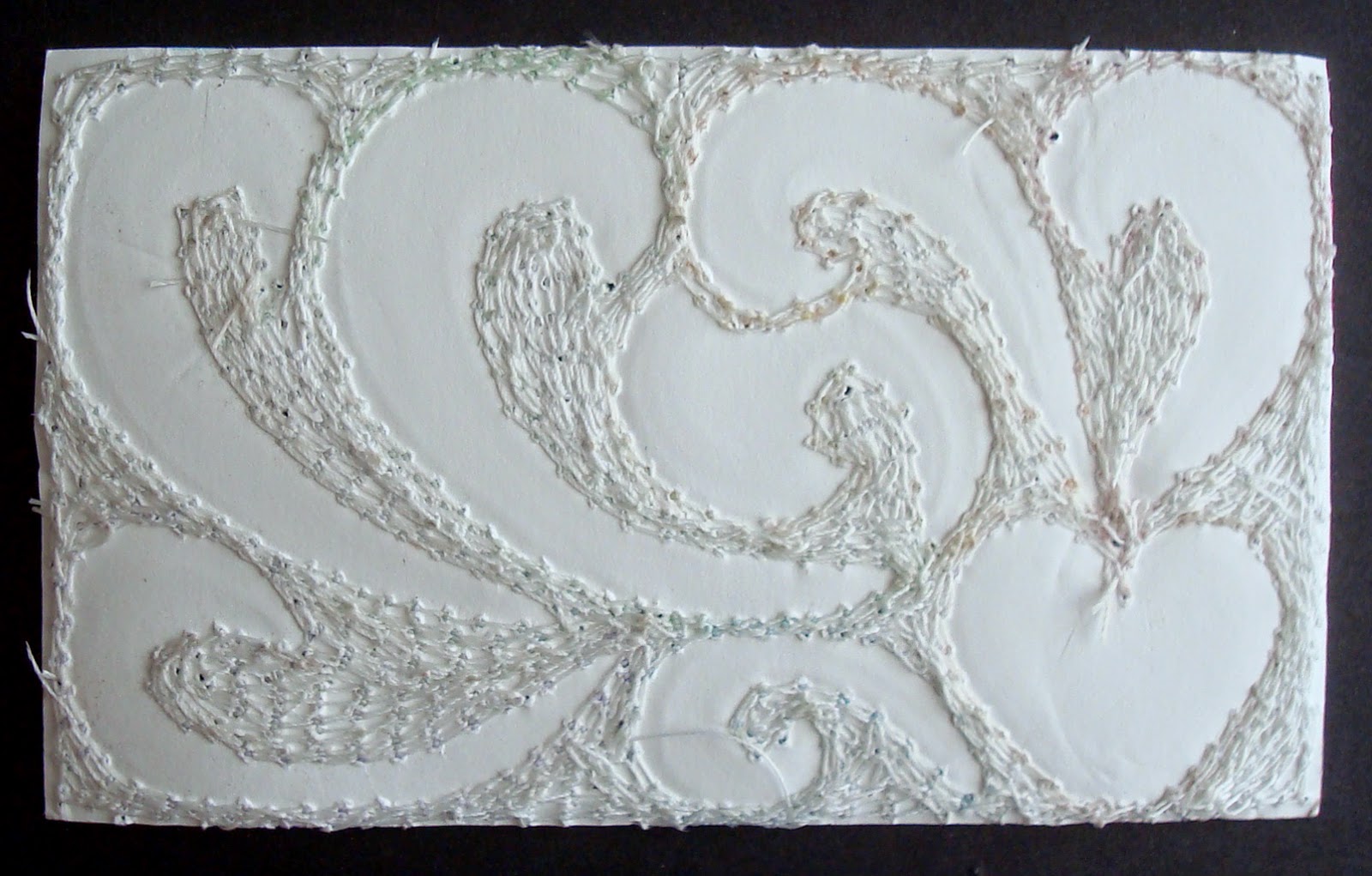 i almost like the back even more than the front. and the photos hardly do it justice, this thing is all about TEXTURE, baby! 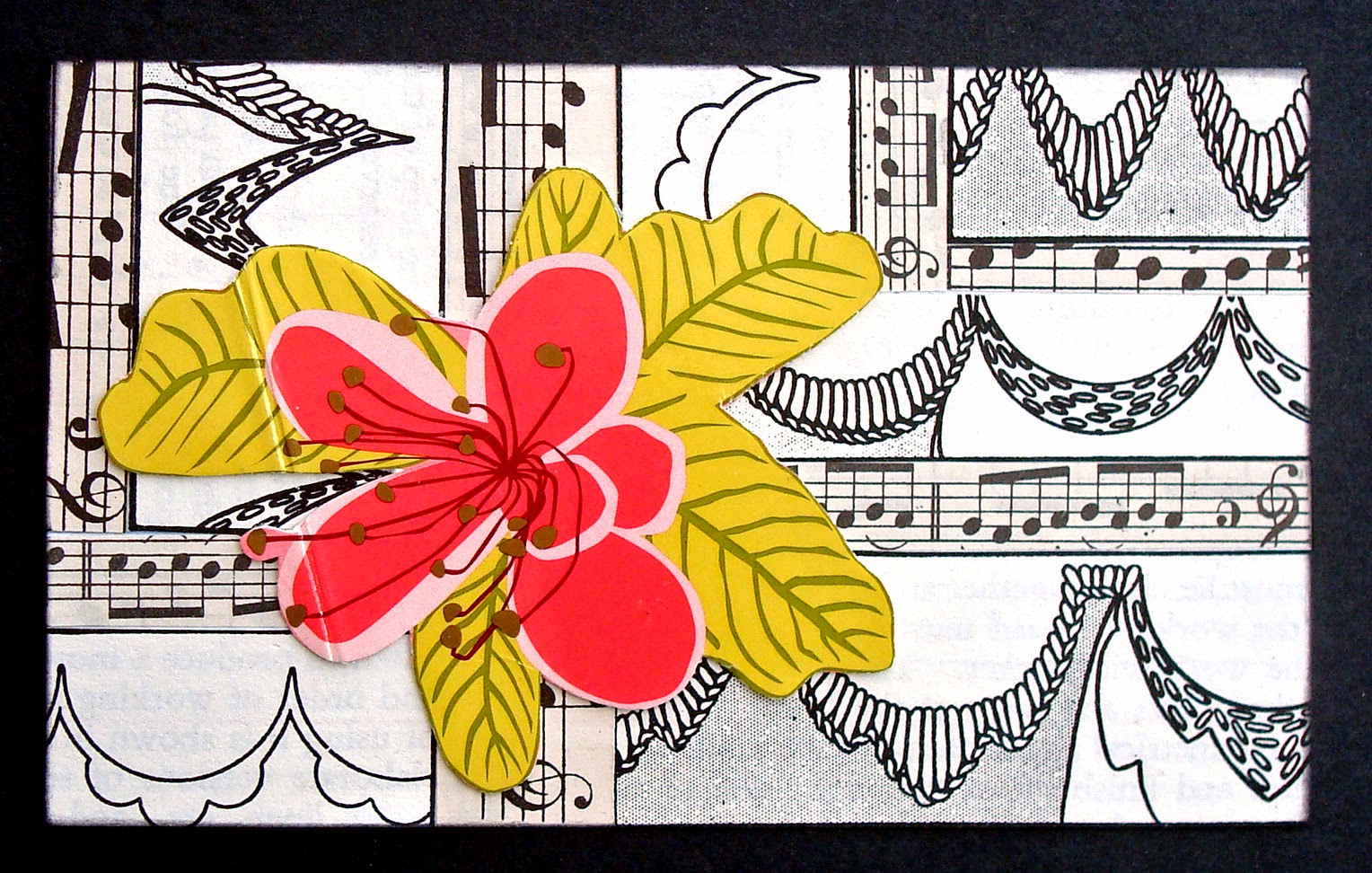 015: musical grid
i had some scraps of sheet music and embroidery illustrations leftover from something else. i was playing with the grid idea. it didn't quite "gel" yet, but i think you'll see more. 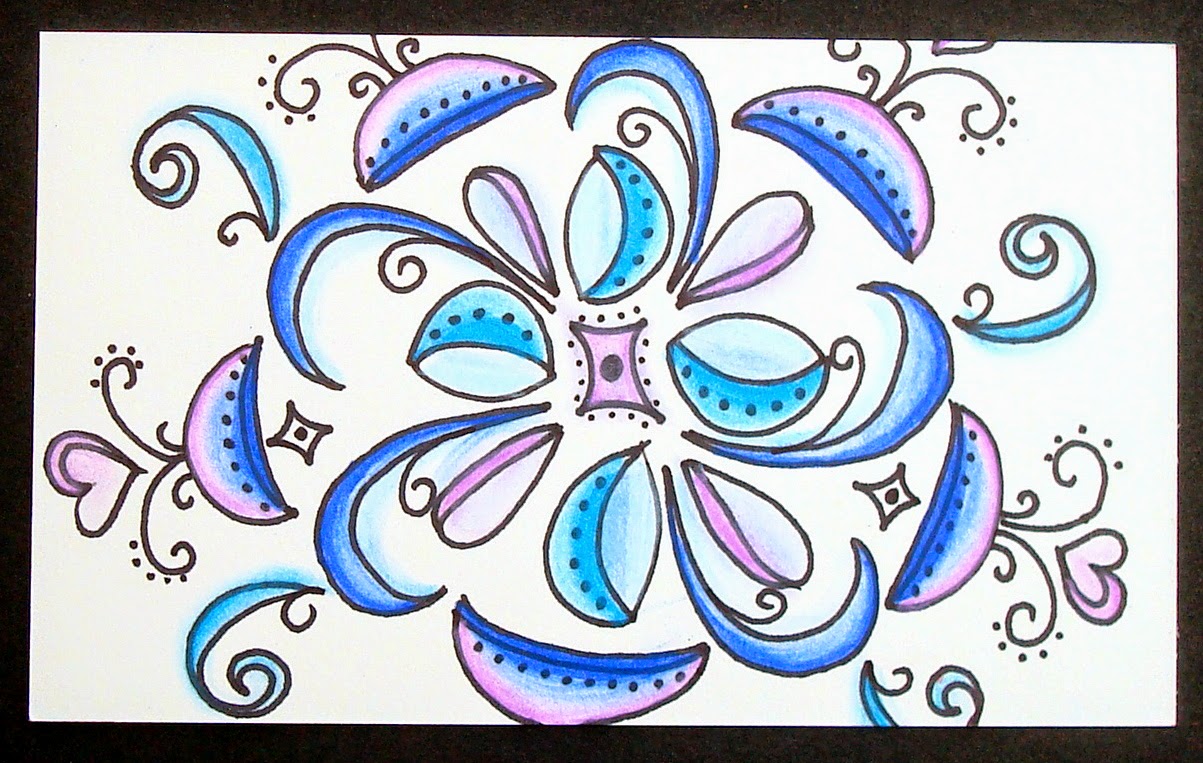 016: a mandala kind of like tammy's
another thing to love about ICAD: it made me realize i like to draw and doodle! i'm not good at it, in the sense that i can't render on a page what my eye sees, so i've always found drawing a frustration. but it turns out that if you don't NEED to come away with something that looks a particular way, the frustration evaporates... and it's replaced with FUN! 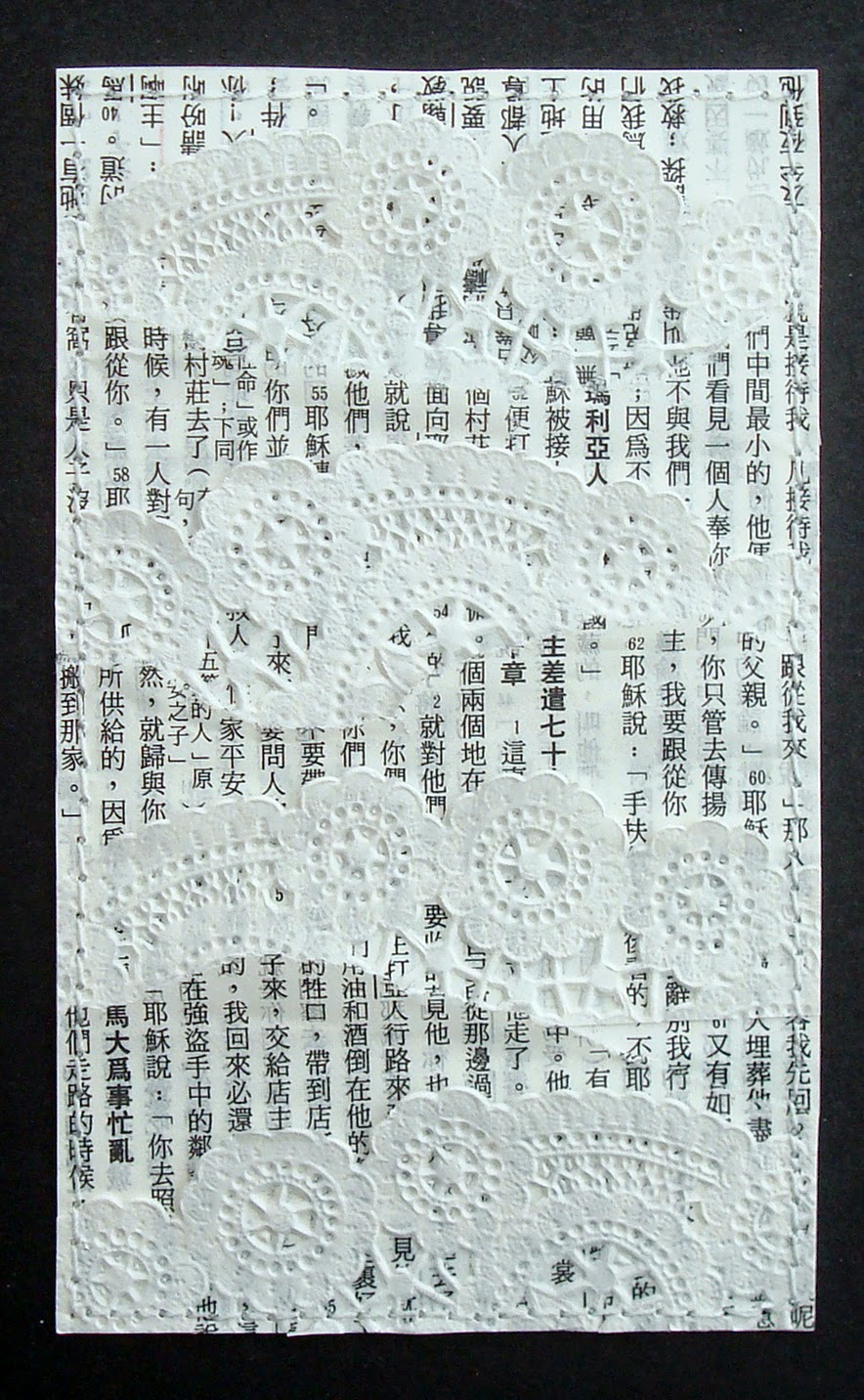 017: torn layers
another card that doesn't really look like much, but was another big lightbulb moment! torn textural layers of whisper-thin chinese text paper and a cut-to-pieces doily. there's no focal point or anything, but again, the texture is awesome, and i think i'll be looking for a way to make this idea into something more substantial. in the meantime... it was ♥FUN♥! 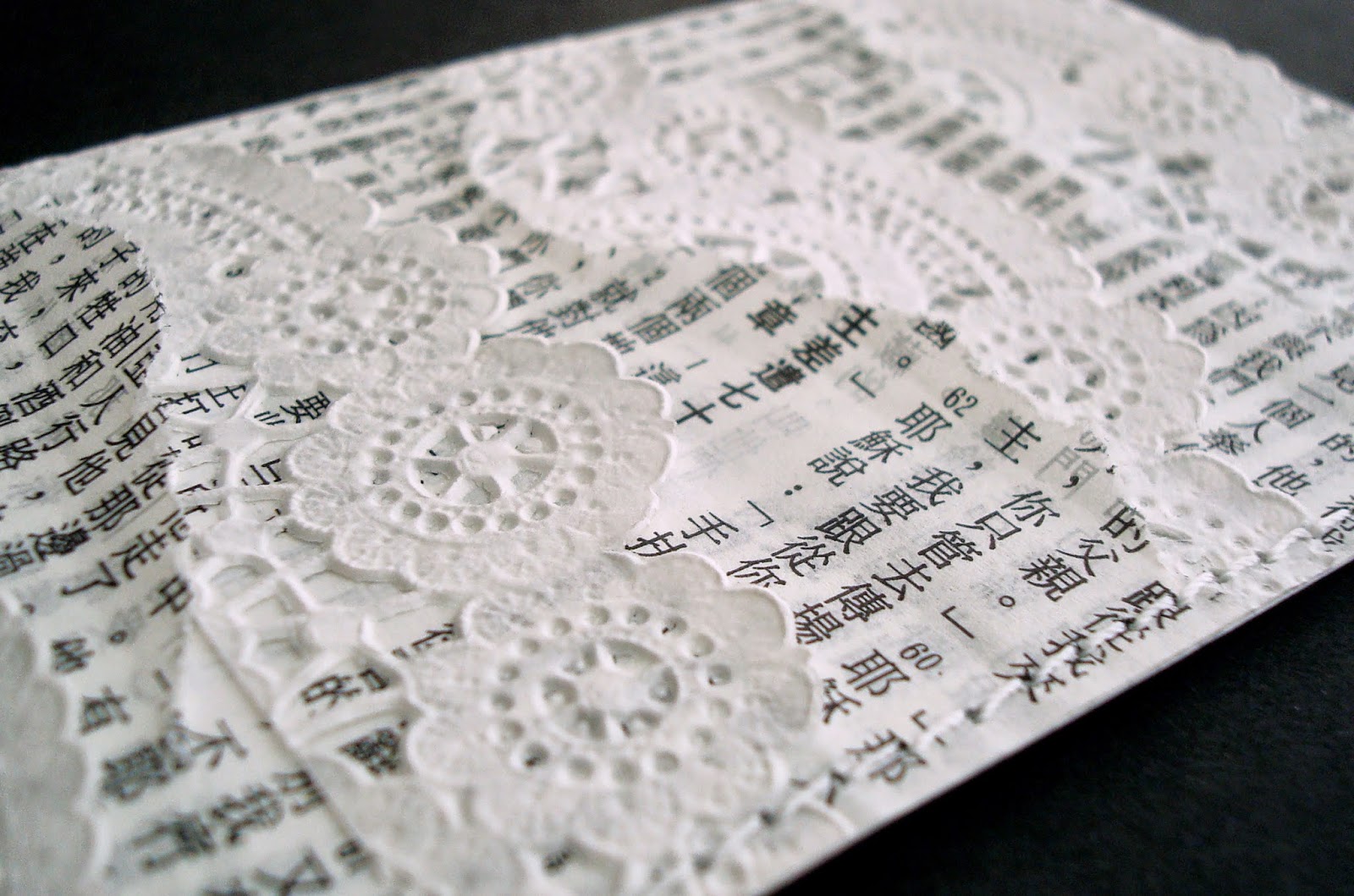