we're still celebrating the books, films and television specials of the holidays over at ♥JINGLE BELLES♥ thanks to miss irene's brilliant prompt, a christmas story! this week my card is based on my brother's childhood favorite, "frosty the snowman". remember, in the early 1970's, there was no such thing as dvd or dvr; there actually wasn't even cable yet-- at least not in the suburbs of philadelphia there wasn't! the (three!*) tv networks only showed things ONCE, and you did not get the opportunity re-watch programs on demand. so shortly after thanksgiving we kids would suddenly become VERY interested in the newspaper; specifically... the television listings... to be sure we knew EXACTLY when frosty, rudolph and charlie brown would be shown that year! :)


my card doesn't feature *THE* official frosty of tv fame, but this sweet little vintage-style image from october afternoon definitely gave me the right vibe in terms of both cuteness and nostalgia, so i built my card around him. i used the current (awesome!) retro sketch (#120) to guide my layout. 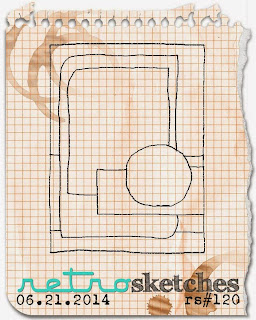 why not check out irene's and stephanie's cards-- not to mention the fabulous christmas story gallery over at ♥JINGLE BELLES♥?!

*if you were very lucky and your tv got UHF, you might have had access to two or three additional channels that mostly showed reruns and films; i have a vague notion that some UHF channels may have only broadcast in black and white, but i could be remembering that wrong...
Posted by lauren bergold at 12:00 AM