just when you think that monsta christmas could not be beaten for sheer random laureny weirdness, i present my second card for our ♥JINGLE BELLES♥ creature feature prompt, a little thing i like to call flamingo christmas! 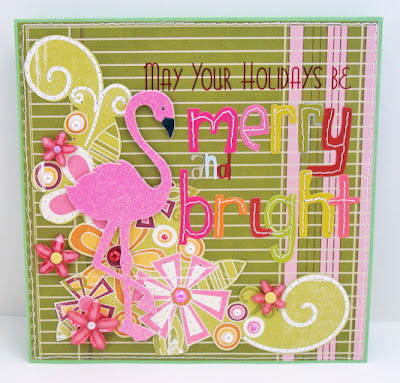 i'll have you know that this is not the first flamingo christmas card i've made! no sirree, bob! this is... ok, it's actually only the second flamingo christmas card i've made, but i'm definitely going to make more in future, because they are FUN! in case you're interested, the first one was made right around the time of the first monsta xmas card; which is how i found it again, whilst looking for the links to the early monsta cards. and once i found it, i remembered how much i loved it at the time, and also how much i loved this flamingo one that gina, and i thought, "it's been too long"! 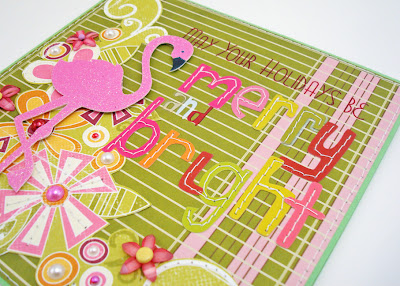 it's not especially christmassy, really, is it? but then, not everyone celebrates christmas, and i like to have a few cards that are more of a generic winter/holiday season so as to include everyone. BY FAR the most time consuming part of this was stitching those letters on; that took ages, and it took almost as long to fish all the thread ends to the back of the panel. because i knew there were going to be serious amounts of those dangly accoutrements at the end of the process, i did my sewing (except for the outline around the edge of the card) BEFORE i attached the center panel, so that they'd be hidden in the space between the two squares. given the serious commitment of time and fiddling with thread, why did i bother to sew the letters on? well, for one thing, i knew the pop of white would make them stand out just a little bit more prominently, and that stitching would be both more textural and more fun than pen; but mostly: these are older stickers that no longer had as much stickiness as one might wish, and frankly, they were just NOT going to stay on long enough to make it into the envelope, much less their final destination. for the record, they are now my FAVORITE part of the card. so there.

one of my favorite parts of friday morning is heading over to the 52-card-pickup linkfest, where i am always blown away by what patrice has made; care to join me? then you really must pop over to ♥JINGLE BELLES♥ and see stephanie's card, and peruse the creature feature gallery so far, it is already most impressive!
Posted by lauren bergold at 12:00 AM