this week at ♥JINGLE BELLES♥ our theme is shaped cards, by which we mean anything apart from a square or rectangle. my "go to" on these occasions is generally a round card. i think they're dynamic and interesting... and they have the added advantage of not being at all hard to make! :)
this time i thought i'd branch out a little bit. i've collected some really fun digikits here and there; one of my favorite xmas ones is "jolly lil friends stickers" by mindy terasawa. i adore the sweet little faces of the characters and find them really flexible and adaptable to a lot of ideas. (for example, i made these kid gift bags last year, and these the year before last!) in this case, i also thought the relatively simple shapes would not only look fabulous, but be pretty easy & quick to cut out! 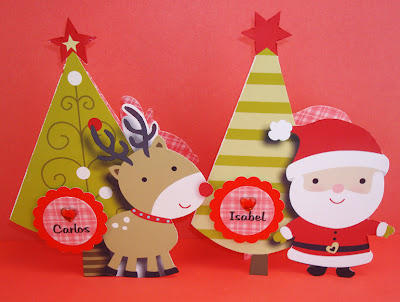 the "easy to cut" factor became crucial when i decided that i'd make cards for my nieces and nephew as well as for my bestie's little ones; which meant i'd need SIX! i decided on two designs that i'd print out three times each on glossy photo paper which i glued to some thin patterned paper so the inside would not read "kodak-kodak-kodak"! 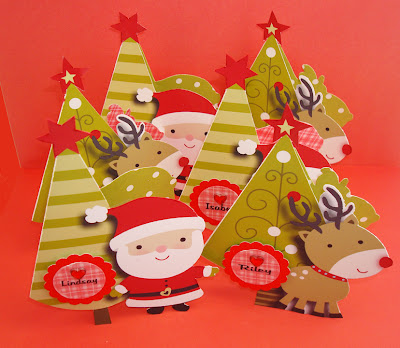 i'm well known for making "single sided" cards (basically shaped POSTCARDS, lol!) rather than enmesh myself in a lot of engineering, but while i was manipulating the kit images in printshop, i realized that if i used the two simpler tree you see above, the left side of the tree would give me a nice straight line on which to score and fold the hinge of the card. it did mean i needed to place the finished design (basically a character with a drop shadow layered over a tree) on a bit of an angle... like this...

...so that i could fit two (just slightly smaller than A2) cards to a page. i also flipped the reindeer horizontally, so that i'd only have to cut out ONE antler, rather than two. this is what's nice about digi; a little thought can solve a lot of problems!!!
i thought i'd do a bit of "real" embellishing at the end, but the cards resisted this entirely. they kept telling me they were DONE! so we compromised by printing the kids' names on a clear label, punching a circle & a scalloped frame, and adding a heart shaped gem at the end.
i cannot wait to see what everyone else will do for this prompt, i'm thinking we will see some AMAZING creations this week! as usual, we're open until next wednesday at 6pm eastern time, and we'd ♥LOVE♥ to have you jingling along with us!!! ♥
Posted by lauren bergold at 12:03 AM