it's only week three of the awesome HEART the ART project gina is hosting at tyggereye art, and already i've gotten very silly. on the other hand, that's still two weeks longer than i usually last, isn't it?! :)

this time the prompt was "CLEARLY...". i thought of several quite sensible things i could discuss, but somehow i kept going back to the very first thing that popped into my head when i read that word; a line from the scene in the princess bride in which the villain vizzini is trying to discern & avoid the poisoned cup in his battle of wits with the dread pirate roberts.

i know, i know: WHAT kind of subject is that for an art journal page?! well, ok, it's a really weird one, but the fact that my sister* and i know EVERY SINGLE LINE of the film, and there are at least half a dozen which constitute catchphrases in our family... (used even by relatives who've never seen the film!) ...kind of deserves to be commemorated, for better or worse, dontcha think? by sunday night, when i realized i'd stopped pondering the wisdom of using this subject, and moved onto HOW i would make it into a page, i knew it was a done deal! 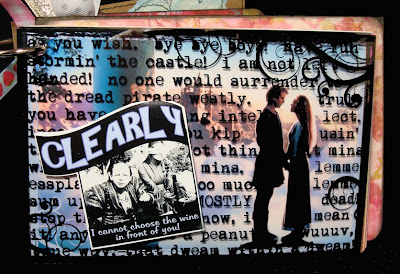 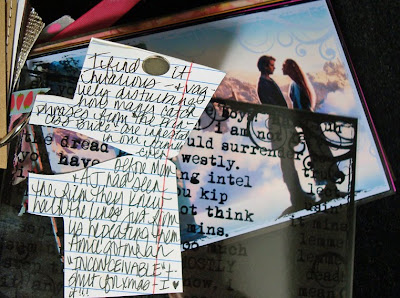 i knew right away i'd use the poster art (sans text) from the film, to set the tone. i knew i wanted to list a bunch of my favorite quotes. of course i had to use vizzini's line, to encompass the prompt...and i twigged pretty quickly that i needed a smaller photo which illustrated that particular scene. this book is 4 x 6"--either i needed to work realllllllllly small, or layers were called for! once i started laying everything out in printshop, i knew there was no way to fit in all the elements and my handwritten journaling, so i opted to hide the latter inside a little card made from vizzini's photo. i solemnly swear to you it was not until AFTER i had printed the text layer on a transparency that i realized this technique is ANOTHER play on the theme, "clearly"...but to me that makes it even better! :)
*from whom one of my xmas gifts was THIS SHIRT. i've already worn it to the gym half a dozen times, it makes me--and pretty much everyone who sees it--laugh every time.
Posted by lauren bergold at 6:58 AM