this week's challenge at shopping our stash is impressively new-year-centric. for "out with the old, in with the new" we'd like you to use something super old from your stash AND something not quite so old - new even! since that is one of my favorite things to do at any time, i was pretty psyched. here's what i made:


ok, so, what's old and what's new? the stampin' up "you're delightful" set is new (from stephanie, my favorite SU demonstrator!); the map and ledger stack is fairly new (on sale at the big box crafting store just before xmas); all of the rub-on transfers are ancient (but i still love them); and the trading stamps which form the second-to-bottom layer of the collage (which are thus difficult to see, sorry!) are kind of both, in that they are obviously vintage, BUT... i've only had them for two weeks... they were part of my xmas gift from stephanie, who is amazingly good at finding things that will make me literally *gasp* when i open the package! 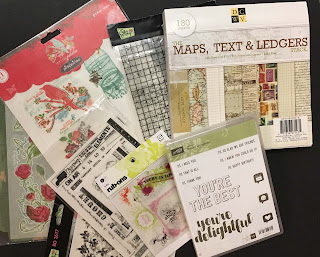 here's a shocking true confession for ya: i LOVED rub-on transfers. still love them, in fact. maybe more than rubber stamps, which i know are many cardmakers' favorite supply. the problem with rub-ons, though-- and i suspect this is why they are no longer very popular-- is that the quality varied considerably; in fact, it was possible to bring home a full-price, brand-new, name-brand package and have them entirely fail to rub-on properly. admittedly a huge drawback. unless... you're using them in a collage context (as i have been recently in my instagram collages) in which case, having them go on imperfectly is kind of weirdly cool. 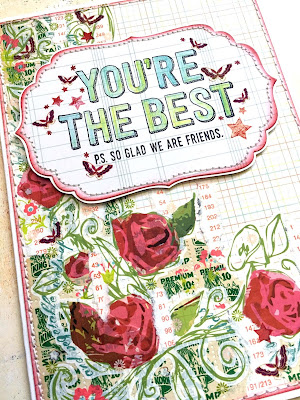 this is the first time i've built a full sized (A7) card around a collage of vintage bits + rub-ons, but it won't be the last because i really like how it turned out. of course, as murphy's law dictates, seeing as how i was counting on the largest rub-on (the roses, which are prima, and probably 7 or 8 years old) going on in a rather funky, intermittent manner, OF COURSE it transferred PERFECTLY, lol! but luckily my idea still worked. and, to make up for that, some of the tiniest ones, which were a bit newer, that i thought i'd "fill in" any blank spots with, went on very badly indeed. the funny thing is, you cannot just say, "well this manufacturer just made an inferior product" because i've used several other varieties from the same company, bought around the same time, and stored exactly the same way, which went on well. go figure. 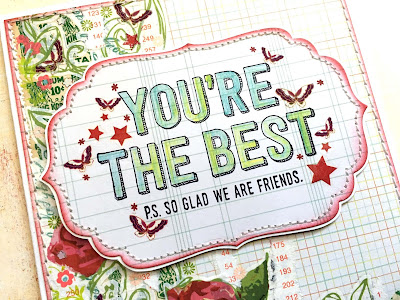 the final new thing i've used on this card is the set of koh-i-noor hardtmuth tritone "magic" pencils that santa brought me. so far, i've used them to do some line doodles, but this is the first time i've colored something in with them. and yes, all of the letters were done with one pencil, so you can see where there really are three shades in each, and you get a nice variety as you go along.

speaking of a nice variety, as always, my design team sisters at SOS have outdone themselves when it comes to providing inspiration for you. be sure to check that out, as soon as possible, k? ♥
Posted by lauren bergold at 6:30 AM