yes, it's the second week of holiday tic-tac-toe at ♥JINGLE BELLES♥ so you still have plenty of time to link up with us! just choose a row, a column or a diagonal from the board and get creative! 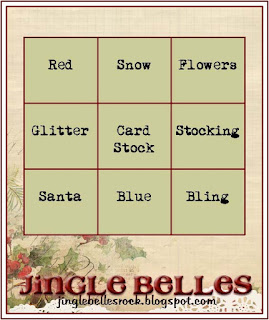 this week i chose the top row: RED + SNOW + FLOWERS: 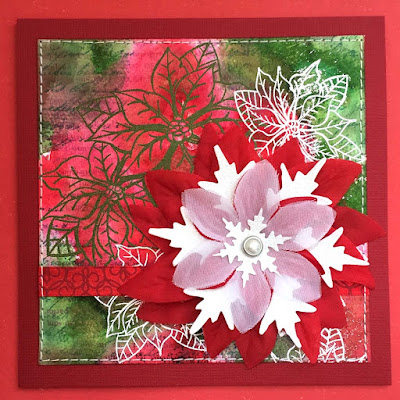 if you're thinking that my background panel seems familiar, you are not having "deja vu" it really is similar to this card from the beginning of august. it has the same combination of ken oliver poinsettia stamps, red and green colorburst and liquid metals. here's a crafty secret for ya: whenever i'm trying out new techniques or essperiments-- especially one with a lot of sequential steps-- i'll often work on more than one panel at a time. because it is not at all uncommon for me to mess up on step 8 of 9! and it's so disheartening to have to start over from the very beginning, isn't it? so i'll start two or three similar things simultaneously, thus mistakes are much less of a problem, and if i wind up with more than one success, i have "extras"! at the time i was working on this, i had tried using nuvo drops for the first time and found that it was possible to make a huuuuuuuuge mess with them, lol! i also didn't think the green embossing showed up enough, didn't get super-clear images for some of the white embossing, and realllllllllllllly hated the bits of black embossing i had tried first at the bottom of the page. i corrected all of the above on my second attempt and used that panel, un-covered-up, for the first card. when i found this sheet again, i still hated the black, so i chopped it off immediately. i also discovered that if you are pretty careful, you miiiiiight be able to scrape off recalcitrant nuvo drops. once both of those factors were gone, i found i didn't mind the green as much. the messed up white parts were still messed up, so that's where i put the big flower stack... problem solved! it's a smaller card than the first, and it's got a lot more stuff on top, but i'm pretty happy with the result. 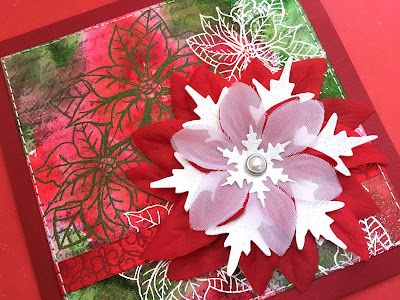 stephanie has an awesome card to show you, and the readers' gallery is pretty fab, as well! why not hop over to ♥JINGLE BELLES♥ and check it out, darlings?
Posted by lauren bergold at 12:00 AM