this week's challenge at shopping our stash is called "apple of my eye" and i'm pretty sure you'll already have sussed that we'd like to see projects which incorporate apples. it can be a loose interpretation, though, so things like apple blossom, or apple pie would also qualify. OR, although it is not yet officially sanctioned, if you manage to work in an i-phone, a macintosh computer or fiona apple, i promise to go to bat for you with the SOS judging committee and insist that's a valid representation of the theme!!! meanwhile, i  chose the classic fruit, albeit quite a stylized version. it's from the ancient SEI "fruitstand" collection (thus making it particularly stash-o-licious) the papers of which i bought several times over and have never failed to enjoy using, including right here: 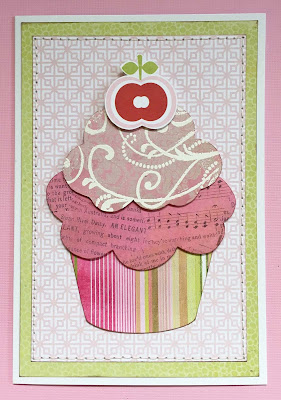 the only problem with choosing your embellishments first, is then you have to go back and find something you can embellish with them! which is somewhat "cart before the horse" lol. i'm not sure i've ever seen a cupcake with an apple on top, but in fairness it's a BIG cupcake and it's got TWO layers of frosting, which hopefully will provide enough support. my top layer of icing has white embossed swirls made by one of my verrrrrry oldest and most beloved stamp sets: rhonna farrer's "flourishes" which i've had for at least ten years and maybe longer! thus i'm jumping in with the "anything goes" challenge at retro rubber! 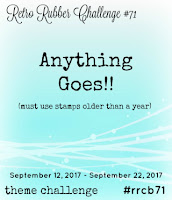 hop on over to SOS to see the amazing creations from my dt darlings, and start planning your own apple-related masterpiece! ♥
Posted by lauren bergold at 6:30 AM