this week's challenge at shopping our stash is pretty self-explanatory, i think; we want to see projects with three (or more!) trees on them. Easy, peasy, tree-sy! :)


ok, so, very nearly a normal card from me this week, lol! except for the vintage volkswagen, which is sort of a joke with my sister. we often pin the same thing, sometimes even on the same day. this "draw a vw beetle in 6 steps" tutorial was one of those. the reason we both wanted to draw it is because when we were little our dad had a red 1960's beetle convertible that as a toddler, amie called "the beep beep" and it was referred to thusly by our family forever after. i'm not sure how or why the dear old beep beep (long since departed for car heaven) wound up in such an exotic tropical setting (we grew up in eastern pennsylvania) but this was one of those cards that just sort of evolved on its own, so i let it. 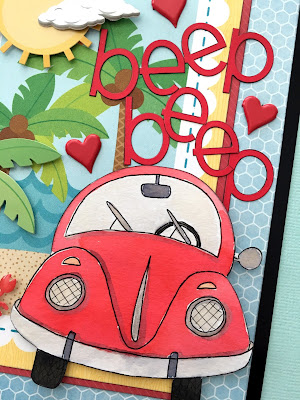 there's loads more tree-inspired goodness over at SOS... why not treat yourself, darlings?!
Posted by lauren bergold at 6:30 AM