Tape LooOoOOoOoove (and a Tape Tester!)

It my day on the Eyelet Outlet Blog again, and I'm talking about my forbidden love: WASHI TAPE!!!!!! :) I may have mentioned before that I quite like the stuff. Some people have even suggested that I own too much of it. They're wrong, obviously, but not nearly as wrong as they'd be if they thought a person with as much tape as I have wouldn't be all that excited about the gorgeous NEW tapes at Eyelet Outlet. Because LOOK:


And that's just a sampling of what's new and upcoming at Eyelet Outlet, in fact, not everything is even officially *IN* the shop yet, so be sure to keep checking the blog, the shop and FaceBook throughout September because the designers will be showing off loads more cool stuff! It's not just tape, either, there's also a whole bunch of awesome new brads (I've used one of the Balls of Yarn as the center of my Solid Color Paper Flower stack) and a huge collection of epoxy shapes in sooooooo many beautiful colors. But I digress. We were talking about tape.

A few tapes I especially love are the Paris Washi, the Tape Measure Washi, the Wide Travel Washi, the Stocking Washi, the Reindeer Washi, Season's Greetings, Cruise Washi, Book Washi... I could go on, but you get the idea. Oh, and I didn't even mention the Skinny Tapes, which come as sets of three 5mm tapes. The Skinny Washi Hearts Set is super cool, imo, as well as the Star-Heart-Pawn Set (those tiny clouds!!!) If you want to see all the choices, spend a little time in the Eyelet Outlet shop, you won't be disappointed! Other tapes I used in my card include: Admit One Ticket Tape, Flowers With Cute Bug, Holiday Dots, and Stripe Washi. 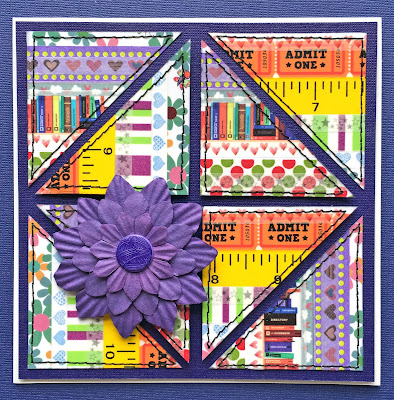 Faced with so many gorgeous choices of tape, I decided to make one of my favorite styles of quilt card, for which you fill a large cardstock square with neatly lined up strips of different tapes, then cut the fully covered square into segments, which get re-arranged into a quilt-like-pattern. Like this: 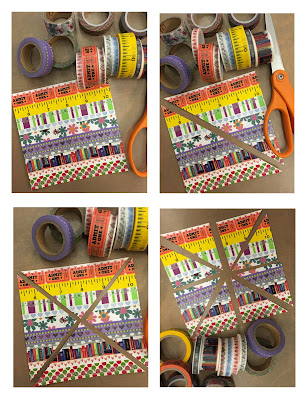 If you'd like to see the entire method, I did a step by step tutorial a few years ago, featuring a card that is made exactly the same way as this one, but using strips of patterned paper. My favorite material for this is definitely *TAPE* though, because it's just so flippin' easy; heck, you don't even need adhesive! To enhance the quilting theme, I machine stitched around each of my triangles, before adding a Solid Color Paper Flower stack embellishment with a Yarn Ball Brad center. 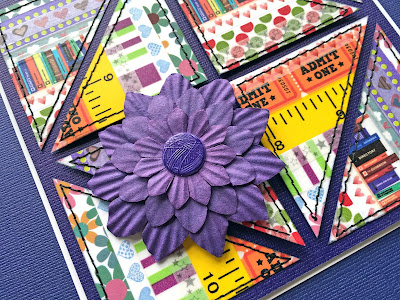 Of course the one teeny drawback about tape is that it comes on rolls, and depending on how translucent the tape is-- and how long the repeat of the design is-- it can be difficult to see exactly what you're getting, or how well it will match the rest of your card... until it's actually stuck to your card, by which time... it's already stuck to your card! a few months ago I hit upon the idea of making a "tape tester" by sticking a bit of each design onto plain white cardstock, so I could see at a glance what I had, and how well it coordinated with my other supplies. When my crafty BFF and fellow EO Designer Stephanie saw this, she thought it was a great idea, but suggested it would be even better if I used a clear plastic base, so that the "tape tester" sheet could be laid right over one's project as a sort of preview mode. She was right, of course (she usually is!) so that's what I've done: 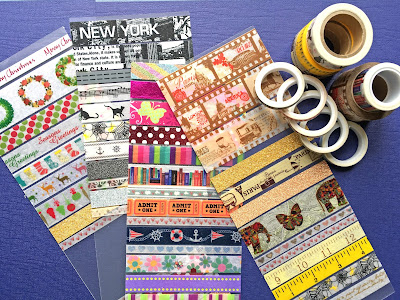 I cut up a sturdy but inexpensive acrylic file folder from the office supply store to use as my base, but you could use any clear plastic... even a bit of packaging, or one of those clear containers in which you get takeaway from the salad bar! You can see that I've arranged the tapes by color, and also a bit by theme, for example, all of my holiday tapes are grouped together. Some tapes appear more than once, because they fit equally well into different groups, and it's nice to see them side by side, in context, I think. Of course you can arrange YOUR tapes in any way that makes sense to you, but one thing I think I can promise is that you'll use your tapes more when you can really see them!
Posted by lauren bergold at 3:00 AM