i'm super excited to be the guest designer on the retro rubber challenge blog this week, especially since it's a sort of free-style week and you can basically do whatever you'd like! just remember to use at least one stamp that's more than a year old, AND you must mention the stamp and it's approximate age in your post, ok? other than that, you can go as wild as you want! here's my card, or at least... here's one of the cards i made:

ok, so, you can see i've taken the assignment of "anything goes" quite seriously, lol! my card was inspired by... wait, you'll LOVE this: a brochure i found in home depot! (see pic below) i saw all those colorful hexagons and i thought, "i have a hex punch! and i have paint chips! and i can stamp flourishes on top of them, then add some eyelet outlet bling!!!" and thus, my idea was born. the flourishes on this card are old faves from a set of sassafras lass clear stamps. i knew they were considerably more than a year old, because of course sassafras closed longer ago than that. what i didn't realize was that they had closed in 2011! and these were not new, even then. so they are well and truly *OLD* you guys. for that matter, the giant tattered angels flourish stamp that i used on my other card is pretty old, too. possibly not pre-2011, but at least pre-2013 because i know i had it before we moved into this house. 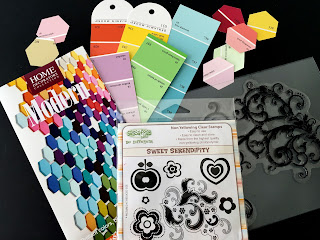 so here's the other card, which is actually the one i made first. there's no bling on this one, but i've matted it on some rather gorgeous croc-textured vinyl paper, and i outlined the flourish with a sharpie to make it stand out a little more. oh, and i sewed around the edge, for texture. but other than that, it's the same idea, accomplished in the same way. 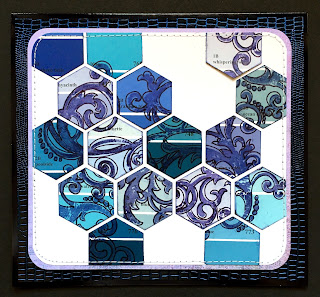 i hope you'll come on over to retro rubber, see the other designers' awesome cards and join us in having fun with some of your older stamps! remember to mention the age of the stamps, and please note that your card may be submitted to a total of no more than *10* challenges, including retro rubber!