i suddenly realized the other day that i haven't done a non-assignment blog update since icad ended, which means i have over a month's worth of funky things that i've posted on instagram but not here. so i think i'll break them up into categories and post them over the next week or so. today i've got some collage pieces: 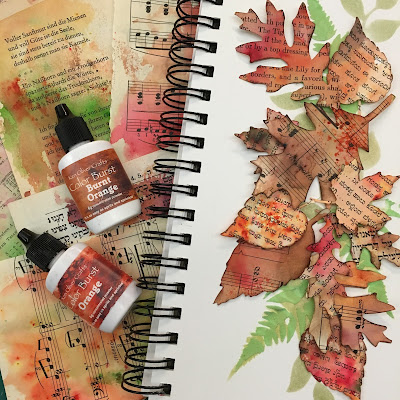 if you saw the autumn leaves gift bags i'm teaching as a class at paper anthology later this month, this will look a bit familiar to you. it's actually the page of my sketchbook where i worked out my ideas of what should be in each layer of the collage on the bags. in this "draft" there was a layer of modeling paste under the book paper tinted with colorburst, but over the stenciled distress ink. for the class i later left out the modelling paste (on the grounds that TWO sets of drying times would be inconvenient in the context of a class) and added flowers and gems to bump up the texture factor, instead. 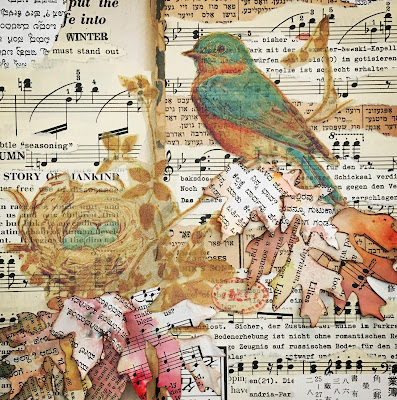 a few days after i finished the "official samples" for the gift bag class, i used up the leftover leaves in this collage which has a background of torn vintage paper bits and a rather lovely bird from a napkin my mom "liberated" from a fancy dinner party she attended.
(because YES, if you have something beautiful that's made of paper, and anyone in my family sees it, they will use the vulcan-mind-meld quite mercilessly in order to take it from you and give it to me. i have trained them well, lol.) 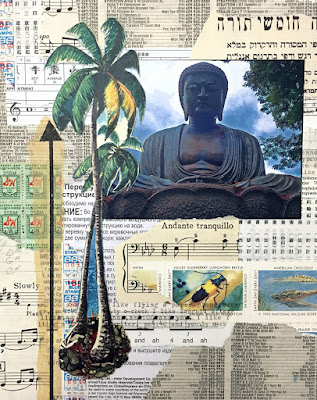 here's yet another background of random bits of vintage paper, made over the course of several weeks, because it's soooooooooo much more fun to paste things into my sketchbook than it is to actually clean them up. at some later point i found the palm trees illustration in an old book, the nature stamps and an extra print of a buddha photo i took at the foster botanical garden in honolulu.
...and they all lived happily ever after... 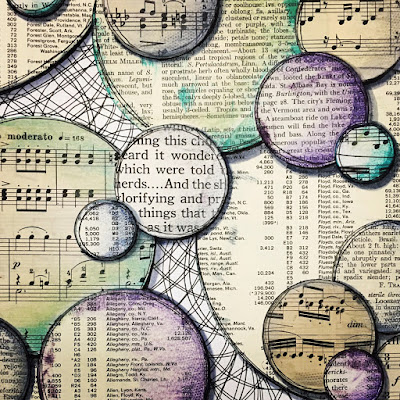 i've only realized while writing this post how many of my collages are inspired by leftover bits and bobs. in this case, i had a bunch of circles ranging from an inch to six or seven inches. so OF COURSE i glued them into my sketchbook. and then it seemed like it'd be fun to practice shading one side with ink and distress crayons; and then i doodled in the bits of background that were still showing; and, well, i guess that's about it really. it kind of reminds me of a galaxy, in a way...

i hope things are going well in your personal segment of the galaxy this week, but if not, cheer up, it's almost friday! ♥
Posted by lauren bergold at 12:00 AM