which hopefully means that ♥SPRING♥ is just around the corner, woohoo!* let's jump right into the new month with a new challenge from shopping our stash. this one's called "white out" by which we mean you cannot use ANY plain white paper in your project. here's what i made:


ok, so this card is pretty much a reminder that just because there's no white PAPER, doesn't mean there shouldn't be any white space!**  by which i mean, i really really wish that my card base was solid pink or yellow or... well... any solid color rather than the chain link gold patterned paper. but by the time i realized that, i'd already affixed the pennant with all the goodies on, and as newton's third law of adhesives states, "there shall be nothing on this earth stuck together so well as two layers of paper you've decided you hate" so, i'm livin' with it. and i do like all the other fun stuff, which are mostly raided from my "leftover bits" baggie. before you ask, no, the letters are NOT made with an awesome set of oversized alphabet dies, more's the pity. they are actually an ANCIENT set of basic grey's mini monogram chipboard letters that some how i seem to have designated as templates rather than actual ingredients, i guess because they are such an awesome size and font. i traced them on scraps of text paper and hand cut them. 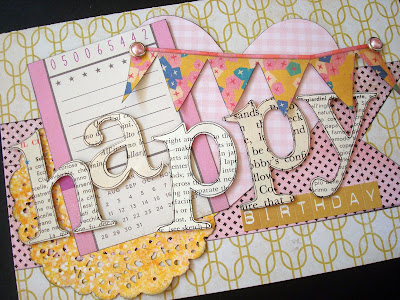 head on over to SOS to see many other fabulous ideas, darlings, my lovely dt sisters await you there! ♥

**white space, in artistic terms, is the area in a piece that isn't filled with pattern or text; sometimes it's called negative space or breathing space. it can be any color, though, it needn't literally be white.
Posted by lauren bergold at 6:30 AM