ok, i promise this is the last post about the really big canvas! technically speaking, there are now TWO really big (30x40") canvases (canvi? ok, nooooo), but thanks to my OCD nature and some extra, blizzard-enforced home time, they're both finished. and hanging in the sun room. and i'm pretty happy about that! :) 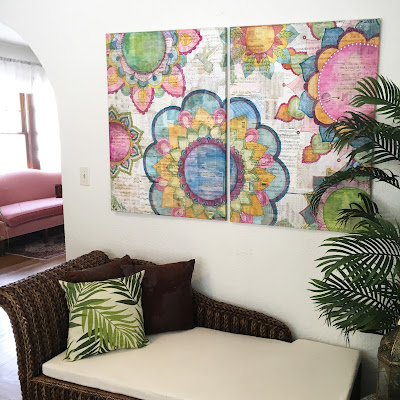 last week i was actually half joking about doing a second panel. honest! i mean... i did think the first one was a bit undersized, but i thought i could probably live with it. then on monday i had to run in to michaels for something, and i thought i'd just see what OTHER sizes of canvases they had, because maybe i'd do a couple of smaller, stacked panels, or... well... something. as it turned out, i had serendipitously lucked into another 50% off canvases sale. which seemed like A SIGN. quite possibly a sign that i am a crazy person, but that still counts, doesn't it?? 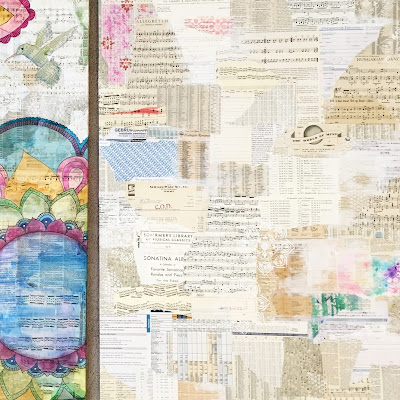 i knew i wanted the two panels to be ONE piece of art. if that makes sense? so i knew that the largest mandala, which runs off the right hand side of the first canvas, would need to be continued on the left hand side of the second canvas. i also suspected that this would be the fussiest and most difficult bit of the whole project. and i was right about that. 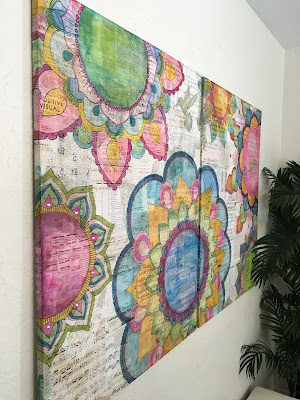 on the other hand, almost everything else about this was easier than the first one, because there was no "discovery phase" in which i had to figure out what worked and didn't work, which colors to use, etc. so in some ways it was less interesting to accomplish, but it went faster. and i deliberately worked as quickly as i could, to ensure i didn't get bored or distracted and not finish. (every once in a while being totally compulsive REALLY PAYS OFF, lol!) 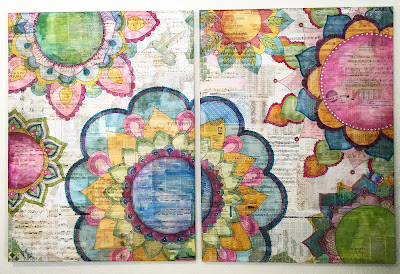 once again, the hero of the day was lovely husband jeff, who removed and spackled the original mounting, and then held BOTH canvases in position while the less competent member of the team hemmed and hawed about heights and widths and things. he accomplished all of this without cursing... at least not out loud... which i think is worthy of a second and even more impressed shout-out, lol. it was quite a bit of extra work, but when i see how well the two panels fill that wall, and how vividly those bright colors light up the room, it feels totally and completely worth it. thanks for coming along on this little adventure... i'll be back to ONE post about smaller things now, i promise! ♥♥♥
Posted by lauren bergold at 6:14 PM