holy mackerel, we are in the *middle* of january 2016 already!!! i know this because we're ready to roll out the second ♥JINGLE BELLES♥ prompt of the year and, as you may have guessed from the title, it's called "oh christmas tree" and what we'd like to see is... (again, i'm betting you're ahead of me on this one) ...a holiday card which features a christmas tree! woohoo! here's what i made:


it just so happens that i've been helping my mom to clear out the apartment of a family friend, during the course of which we've found any number of tiny little treasures, including an envelope full of cancelled postage stamps from the 1970's. in the traditional collectors' sense, they are not worth anything, but they are cool in a couple of ways. for one thing: did you remember that in 1974 it only cost EIGHT CENTS to mail a christmas card??!?!?  yowza! for another thing, some of them are really pretty. like these red and green santa claus ones, which i decided would make a really fun diecut xmas tree. i stand by that decision, actually! 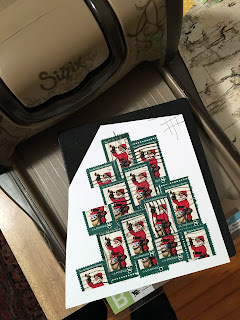 something else i stand by is that the use of a really great card sketch speeds up the creative process amazingly well! this week i've used retro sketches #196, which is rather fab as you can see: 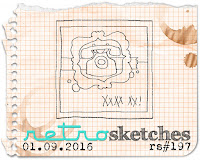 stephanie's card is also quite lovely, won't you hop over to ♥JINGLE BELLES♥ and check it out? (you can thank me later, darlings!) ♥
Posted by lauren bergold at 12:00 AM