this week's challenge at shopping our stash is called "howdy, partner" and the brief is to use something found in the wild west of the united states, such as horses, cowboys/cowgirls, cowboy boots, native americans, buffalo, cacti, tumbleweeds... you get the idea, right? i confess that when i read the description i had a tiny little panic because i was fairrrrrrrrly certain i did not own anything that would even remotely work. i searched my stash pretty carefully anyway, because often there's an item i've forgotten, or even entirely failed to notice because the theme is so far off my radar. but no, not this time. not. one. single. thing. ugh. which, as it turns out, was kind of good, because it meant i had to build something from the ground up --i decided on a cowgirl boot-- and the result is pretty flippin' adorable if i do say so myself. which... apparently... i do, lol! :)

here's a totally gratuitous close-up of the boot, because it had a number of fairly small parts i had to cut out and ink and attach; plus machine stitching on the very verrrrrrry edge of those was somewhat tedious, and i've been fighting a cold all weekend. so frankly, i just feel like i need to put a second photo in this post, please excuse me. but i will point out that the thing that really makes paper-piecing work (imo!) is exactly this sort of tiny fiddly detail, which is not particularly --ok, let's be honest, it's not at all fun to do --but i think is worth the effort: 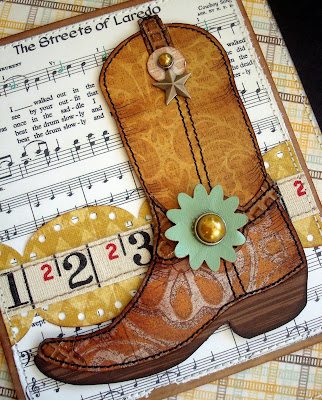 as it turns out, i did wind up having *one* western-themed item, and that was a piece of sheet music for "the streets of laredo" that i found in an old children's music book. i had ruled out its use because at 8x10" it was too big a card background even for me! but then i remembered i could scan and resize it, so i did. i based my proportions around the current layout (#386) from sketch saturday, which illustrates exactly what i looooooooove about sketches, because see that tilty backgound mat? it's pretty much my favorite part of the card, and i would not ever (EVER!) have thought of doing that, not if i lived to be 107 and made cowgirl boot cards every single week. but debra from sketch saturday thought of it, for which she has my admiration and thanks! ♥ 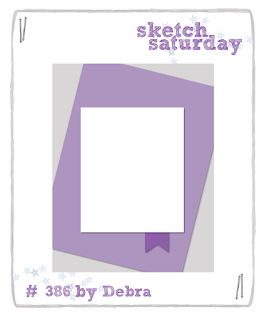 speaking of admiration, you can spend plenty of yours on the luscious DT cards at SOS... why not go and do that right now, darlings?!
Posted by lauren bergold at 6:30 AM