another stunningly fab title and assignment from shopping our stash this week. the challenge? make a project that is "outta this world" by which we mean, it has an alien on it! what qualifies as an alien? well, anything driving a rocket or spacecraft, i suppose; any characters from scifi telly or movies; most types of monsta ...and david bowie, obviously. not into the idea? ok, then, howsabout something more celestial: sun, moon, stars, planets... ok c'mon there has to be *something* in this paragraph that sounds good to you! i s'pose it goes without saying i went with a space/monsta/alien type dude.


does it surprise you that despite having loads of awesome pre-made monstas, including carved stamps by my friend gina and digistamps by my friend jess, i paper-pieced a completely new guy based on something i saw on pinterest?! yeah, me too! it was partially because --after a prolonged and increasingly aggravated search-- i found my container of googley eyes, some of which are quite large. also, i had an idea for a background that was pretty inky and detailed, so i needed a plain-but-substantial alien to inhabit it. and finally, i confess that i pretty much built the whole idea around the sentiment, which i pictured in several different styles of thickers; so again... it needed to be a pretty big card. it's a pretty busy card, too, but i really like it! 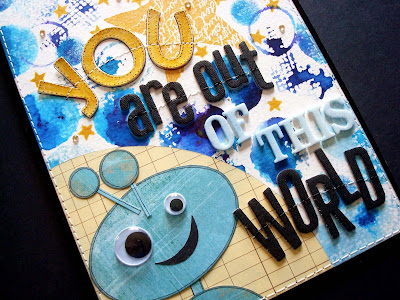 there's more outta this world goodness over at SOS... well, there always is, but it's slightly more literal this week, lol! off you go, darlings! ♥
Posted by lauren bergold at 6:30 AM