at ♥JINGLE BELLES♥ we're still making cards that feature numerals OR one of the elements from the holiday favorite, "the twelve days of christmas"! here's a reminder of those twelve interesting gift items:

i elected to go with numerals again, in the form of a fun date sticker and a super cute holiday bingo card: 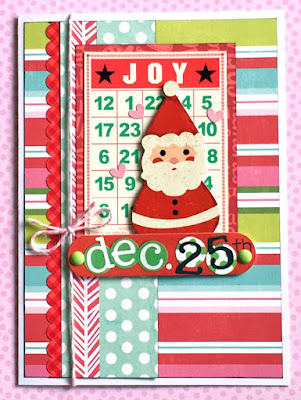 i used lots of ancient bits and bobs on this colorful card: the jenni bowlin holiday bingo card is actually a digital/printable version; i have owned the kit for yeaaaaaars and still use it constantly. in addition, i've got patterned paper, stickers, a couple of borders, twine, round brads... it's all here, in nice flat, mailable form. gotta love that, right? i predict you're also going to love stephanie's card and i highly recommend a hop over to ♥JINGLE BELLES♥ to see that right now, darlings!
Posted by lauren bergold at 12:00 AM