can you believe we've just wrapped up our fifth ♥JINGLE BELLES♥ card-making season?!* but afterall, it's december 2nd and we've been making one card a week since january 1st, so i've got quite a stash. see? 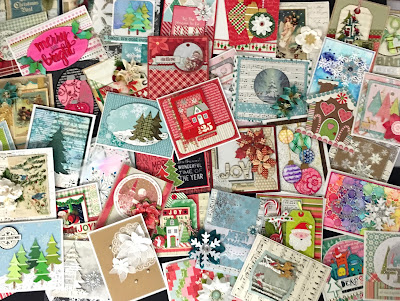 i actually still need to make another card or two, so i'll still be posting xmassy stuff, but boy oh boy am i glad to be wrapping up this holiday chore in december, rather than just starting it! we'll be back at it again on january first, though... and we'd love to have you ♥JINGLE♥ along with us throughout 2017, so consider yourself officially invited to our papercrafting party on new year's day, darlings! ♥♥♥

*if you can't, it might be because you remember we started in 2011, and thus this was actually our SIXTH jingle belles season. as was just pointed out to me. proof that time totally does fly when you're having fun. :)