all flamingos, all the time

some people might argue that i've been making and posting a few too many flamingo cards lately. they're wrong, of course, but i do sympathize. what can i say? i like birds, generally. i like bright colors, especially pink. i like a tropical setting. flamingos tick all of the boxes. plus they have those awesome, long, bendy legs that look like they were invented by one of the more avant garde designers at ikea. i mean, really, what's not to love?

this time, though, it's not my fault, the current theme over at curtain call inspiration challenge is "FLAMINGO" so obviously i had to play! 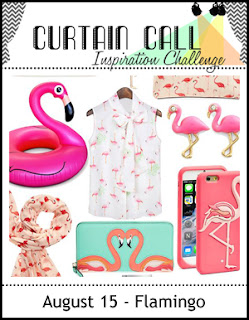 there's another totally AWESOME sketch over at atlantic hearts sketch challenge this week (#173), and that inspired a lot of the elements i used for this card. 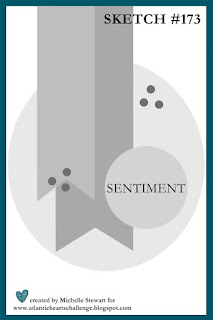 i stamped the large glossy white cardstock circle with two different tropical leaf stamps using two shades of green archival ink, then outlined them kinda loosely to give them a little more visual weight. the small circle is punched from watercolor paper painted with a few different blendy shades of color burst in blue and green. the birds, pineapple and flowers are all from the same sticker sheet, which was a bit of a splurge but i was helpless to resist such epic level cuteness. i hemmed and hawed about a sentiment because technically, the only flamingos in hawaii are at the zoo*, but in the end i went with "aloha" anyway, just because i wanted to. (so there, lol!) i used two sets of cardstock alphabet stickers in the same font so that my pink letters would pop against their black shadows. 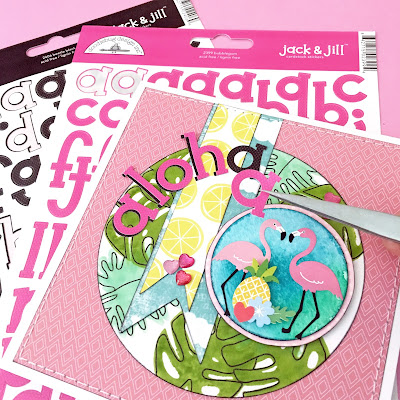 and now i wish you a fond flamingo farewell and a very happy thursday, darlings! ♥

*there are also a few in the exotic bird habitat at hilton hawaiian village in waikiki. because even waterfowl appreciate luxurious accomodations with modern amenities at reasonable prices.
Posted by lauren bergold at 12:00 AM