and especially hooray for sketches by stephanie, who has outdone herself for this fortnight's ♥JINGLE BELLES♥ prompt, which is to make a card (or more likely cards because it's way too cool to use just once!) using this gorgeous thing right here: 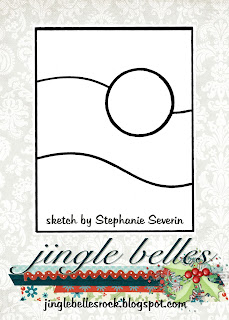 when i was a kid, my dad's "shortcuts" were a notorious (and dreaded, lol) part of any family vacation or road trip. because unlike the traditional shortcut --an alteration in course that is quicker and more direct than one's ordinary route-- in gallagher family lore, shortcut meant an alteration in course that takes waaaaaaaaaaaaay longer than expected and ends far, far away from the intended destination. possibly including within it "a stroll" to a service station after running out of gas. ...but i digress... the point of the story is that in my personal history of cardmaking, generally whenever i "know in advance exactly what i'm going to do" for a particular assignment, a similar phenomenon occurs and the outcome is not even close to what i thought it would be. and/or looks like something that might've been pulled out of the recycling bin. after it'd been dumped onto the recycling truck, under some heavier, messier stuff. i mention all of this because for the first time i can remember, that's *NOT* what happened here! in this case, i had an idea, i carried it out, and it looked like i hoped it would... maybe even a little better... how the heck did that happen??! musta been the sketch!!! ♥


so yeah, i bought some utterly gorgeous new holiday stuff at paper anthology on saturday, which was burning a hole in my creative brain. as soon as i saw the sketch, i thought how cool it'd be to tear the papers into shape and layer them with vintage sheet music... then pop one of the beautiful prima glitter poinsettias on top to act as the focal/circular element. so that's what i did. and it came out pretty awesome if i do say so myself! (which... apparently... i do, lol, sorry that's not very modest is it?!)

i bet you're longing to test drive this thing, as well, so i'll shut up... right after i send you to ♥JINGLE BELLES♥ to see stephanie's beautiful card; plus be sure to scroll down to the pink christmas wrap-up post and take a bow-- you guys helped us raise over $350 for the breast cancer research foundation! thank you!!! ♥♥♥
Posted by lauren bergold at 12:00 AM