i could call this post, "why it's not always a bad idea to do something pointless just because you feel like it" but for one thing, that's a really long title; and --more importantly-- it doesn't mention ♥NARWHALS♥ at all!!! i've been slightly obsessed with said unicorns of the sea ever since sprint used the narwhal song in a commercial that only ran for like three days in may, but made an indelible impression on both lovely husband jeff and myself. then last week i saw this pink plushie narwhal on etsy. consider my mind officially blown. clearly the two ideas were meant to be combined in my sketchbook. clearly. duh. :) 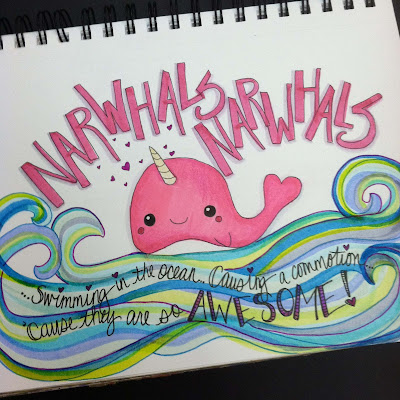 my excuse at the time was that it was the first day of kathy racoosin's third  "30 day coloring challenge" (#thedailymarker30day3) and i did this in marker, and even shaded it a tiny bit, but really... i just wanted to draw a pink narwhal in a swirly sea with hand-lettered lyrics. so i did. i've found that when an idea --however silly or tangenial-- is burning a hole in my brain, it's best to just go with it and get it over with. but in this case, it actually led to what i think is a pretty cool (well, definitely unique, anyway, lol!) birthday card for niece lindsay. because having drawn a narwhal, it occurred to me i could paper-piece a narwhal; and then obviously i'd also need to paper-piece a skyscape* for her to inhabit. with a rainbow that emerged from clouds of ice cream. obviously.

the really interesting thing about this card is that lindsay-- who just turned TWELVE, btw (!!!) --and her cousins had absolutely no problem with the logic of it in any way. afterall, we spent the summer drawing kawaii foods, feathers, minions and in nephew matthew's case, quite a few "lego guys"; to them it is perfectly reasonable that you draw whatever you most love drawing at any given time, and further, that you give your favorite drawings to your favorite people on their birthdays. period. i think there's a fairly awesome lesson right there: stop overthinking and just make something you love... then give it to someone you love. easy peasy. i'm off to do just that darlings and i hope you are, too! ♥♥♥

*for those of you who'd argue it should possibly be a seascape i'd like to point out that whereas ordinary narwhals swim... the pink plaid ones totally fly. seriously. you could look it up in narwhalpedia. g'head, i'll wait. :) :) :)
Posted by lauren bergold at 10:33 AM