i've always wanted to make a crown. i know what you're thinking, you're thinking, "well of course you have, lauren! afterall you've got three princess-obsessed nieces!" which is true, of course, but here's a secret confession for you: three-princess obsessed nieces were not the INSPIRATION for making a crown; in fact, they're really more like an excuse, by which i figured i could get away with making one! :)

so there i was sort of vaguely thinking to myself, "someday i WILL make a crown and give it to one of the girls!" but there was no PLAN or specific occasion attached. then, a few months ago, i saw this glorious crown that heidi swapp made, and i thought "oooooooh!" and sort of had more of an idea *HOW* i might set about it. then, shortly after that, miss kirsty asked if i'd like to try my hand at kit-designing, and i began to select the items for the MY FUNKY VALENTINE kit, which i knew would be in the pixie shoppe before niece riley's birthday...on february 14th!!!

dontcha just ♥LOVE IT♥ when everything lines up neatly like that?! 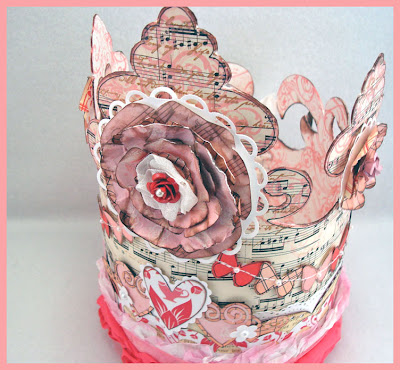 there are A LOT more details of the crown's construction, and A LOT more photos, too, on the pixie blog today! i hope you'll stop over there and have a look because i think it came out rather well, actually.

in the meantime, if queen elizabeth calls, tell her she can place an order any time!!! :)

Email ThisBlogThis!Share to TwitterShare to FacebookShare to Pinterest
Labels: papercrafting (but not cards), pixie dust paperie