having wrapped up ♥pink christmas♥ at JINGLE BELLES* it's time for another october tradition: we always celebrate creatures around halloween, which means we'd like you to break out the llamas, moose, penguins, flamingos, yeti, monsters or... well, basically any non-human creature you've always wanted to feature on a holiday card. or yeah, you could go with something silly like reindeer, lol.


i never can resist doodlebug stickers, generally, and their reindeer in particular. i was a little shocked to find that, despite having bought several reindeer-inclusive sticker sheets this year, the little dude above is the LAST? definitely time to re-order! i've kitted him out with some very majestic eyelet outlet antlers, and given him a beautiful gina k foiled background in which to strut his stuff. i arranged all the bits and bobs according to the current atlantic hearts sketch (#286) which i think you'll agree is pretty inspiring: 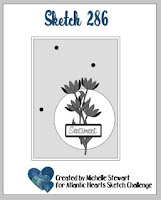 and now it's time for you to head over to ♥JINGLE BELLES♥ and see what stephanie has cooked up to inspire you!

*spoiler alert: we had 69 cards and raised $276 for which we thank you from the bottom of our pink-ribboned hearts! ♥♥♥
Posted by lauren bergold at 12:00 AM